I don’t know anyone who owns a dog or cat that hasn’t had a flea or two. However, this was apparently a bad year for fleas… or good depending on how you look at it. If I were trying to breed fleas and sell them on ebay I would be rich by now. Hey, is there a fleabay?

Some of you may know that I help find homes for the occasional cat, dog, puppy or kitten. My sister, Dorothy, does this kind of thing a lot and I try to help when I can. 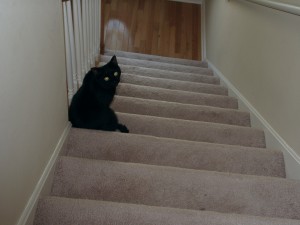 This past summer, I brought a couple of puppies home to spend the night. Their new owners picked them up the following morning. But, they left gifts. Lots and lots of gifts. It was three months before I realized there was a problem. I first noticed that Allyson’s cat, Franna, had some places around her neck. They felt like bites and I naturally suspected Fred, Rob’s cat. I figured they would heal, but they only got worse.
That was when I began checking the other cats. Fleas!
I went out and bought the usual over-the-counter medicine you put on the cat’s neck. I put this on all three cats and it seemed to improve the situation. It looked like we had nipped it in the bud.

Approximately 3 months after first realizing we had fleas, there was a sudden explosion in the flea population. The cats were just eaten up. I rushed out and bought another type of flea repellent and a spray flea killer for the carpets. I treated all the cats and left instructions for Rob to treat all carpets while Allyson and I were in Chicago. Rob treated the carpets just like I asked, but he did it twice. What a guy! 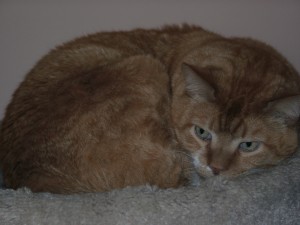 When I got back from Chicago, there was not only no improvement, Franna looked like she was raw from the flea medicine. I rushed her to a vet. He informed me that the stuff I was using repelled the fleas, but as soon as it wore off they came back in force. To make matters worse, Franna is not just allergic to the fleas, she is allergic to the flea medicine. We got poor Franna a cortisone shot. We took her home with new medicine in hand. All three cats had to be bathed thoroughly with dish soap (Dawn is preferred by 9 out of 10 vets) and then let to dry before applying the new medicine. The vet told me it could take up to a year to rid my home completely.

← Jenkins Family Christmas 2005
Who Are These People? →