When Sierra moved in permanently, we had to decide how to accommodate the extra stuff. We have a bonus room over the garage that we felt would be large enough for both girls. After tossing around several ideas, they finally agreed on two individual themes that allowed the room to have an overall look of the ocean. The first image is the room when we first started moving in three years ago. The second image is the room as it is now.

My sister, Marilyn, came over and painted the ocean in a matter of a couple hours. Then she stayed to help add sand dunes, grasses and other special effects. Both girls wanted a crab and she painted seaweed over a bad place in the wall to disguise it. Sierra painted a seagull on her side. Allyson painted a starfish. I added some clouds to Allyson’s side of the sky. 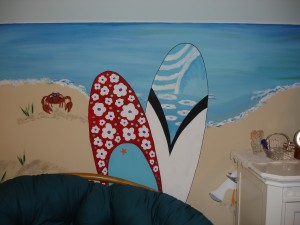 Like I said, they chose two themes that made up the whole ocean theme for the room. Sierra chose a “Surfing” theme for her side and the “Little Mermaid” was top pick for Allyson’s. Both girls bought bedding to coordinate with their chosen theme. I had to go to reliable old ebay to find Ariel bedding, but it arrived in no time. Allyson’s duvet cover and pillow sham came all the way from Australia. Sierra’s bedding was purchased at Target. 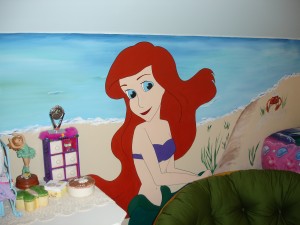 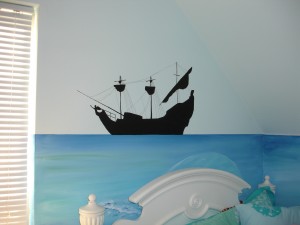 Sierra needed a bed and each girl received new mattresses. We added a dresser, nightstand, armoire, hamper and papasan chair on each side. We put in one bookcase on Sierra’s side for them to share because Allyson has her fridge on her side. You can see the palm tree I painted by the door in one of the images above. We found some great lamps for their nightstands at Target. They fade from white to an aqua color that Marilyn matched in the ocean.

I added surf boards to Sierra’s side and the Little Mermaid, Ariel, to Allyson’s. I also painted tiny seagulls among Allyson’s clouds and a silhouette of the Black Pearl above Sierra’s bed. I think that may be my favorite part of the room.