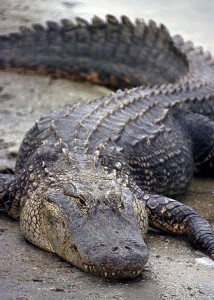 Ah! Spring Break. A time to pack the family in an overpriced rental car and drive 2,000 miles in a a deluge of rain through swamp and gator country. Good times, good times.

My sister, Dorothy, conspired for my birthday to provide me with the one thing missing in my life – a dog. Her girlfriend had a teacup Chihuahua and was willing to breed her so I could have pick of the litter when the puppies came. (Side note: a litter of Chihuahuas means two.) Unfortunately, her girlfriend lived in Louisiana.

So being basically optimistic and having our last road trip with children at least 6 years in the past… we planned our trip. There were tons of changes and last minute preparations. We wanted to be sure and have time to enjoy some sun and surf and swing up through the Dallas/Ft. Worth area to visit a friend on our return trip.

The first day of a trip is always the easiest because you are full of anticipation, excitement and adrenaline. The anticipation is always replaced by aggravation as you realize (once again) that your expectations far exceeded reality. Excitement takes a huge hit from the aforementioned reality check and is then sent to the mat by the uppercut of disappointment. Last, but not least…. adrenaline. Well, if you’ve ever travelled with kids, you know where that goes and how quickly it goes there. But, I jest.

We took off on a Saturday and drove straight through the night. The girls slept in the back seat and we gabbed in the front. Upon arriving in Louisiana, we quickly realized we were happy we chose Galveston Island as our port in the storm. I’m not using the term “storm” figuratively, either. We weren’t impressed with what we saw of Louisiana. We saw swamp, swamp and more swamp. It was wet and rainy the whole time we were there. After a visit with Dorothy’s girlfriend, we drove on toward Galveston. It was funny. Just as we drove over the state line into Texas and were warmly greeted by the welcome sign, the sun came out and the rain stopped. 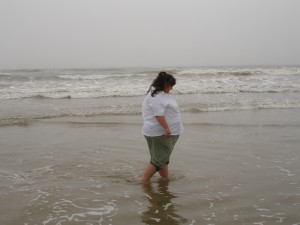 As you may know, Galveston is an island. You cross a long bridge as you enter it from the very bottom of Texas. We could see beautiful, blue waters and dense smaller islands of deep, green grass. All the best waterfront properties were adorned with 2-story homes made to look like 3-story by stilts and lower-level concrete storage rooms. Each home was painted in a “beachy” tone like salmon or mint. You could already smell the salt in the air.

Seagulls were everywhere. Dorothy would comment daily that she thought they were laughing at her. The sound they make could be interpreted that way. 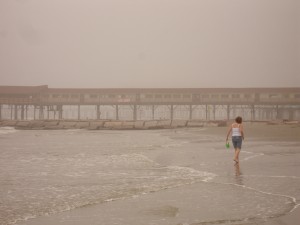 Our first evening there we dined at the pier. It’s full of trendy restaurants and great views of the water. We ate at Fisherman’s Wharf with a view of Elissa, a large multi-masted sailboat. It was beautiful. You can see it in the picture to the left behind the girls. And the food was delicious. I had a light salad and a bowl of lobster bisque. I ordered another bowl. It was the absolute best soup I have ever tasted. Hmmmm Hmmmm.

The next day we ate breakfast at a restaurant right across the street from the beach. After, we parked the car along the sidewalk that ran the length of the beach and grabbed our pails and shovels for a morning stroll. The water was quite cold, but not uncomfortable. There were people swimming in some areas. The girls collected shells and chased the occasional seagull. Neither one of the girls or Dorothy had seen the gulf before. It made a big impression. We must have walked for 3 hours.

Allyson found a wonderful piece of coral. Both girls got back to the car with a bucket of shells in all assorted sizes and conditions. At one point I found a turtle. Not your average sea turtle, mind you, but a Ninja Turtle. Yes, a plastic action figure Donatello. He was floating in an inlet closer to some dunes. I meant to bring him home with me but he was lost to one of the larger waves when it capsized our bucket and ran off with some of our beach prizes. Poor, poor Donatello.

When we finally left the beach, we set off for Moody Gardens. Moody Gardens is really cool and we didn’t have nearly enough to time to explore all it had to offer. There are three main pyramids and each one is dedicated to a particular theme. On this visit we went to the Aquarium Pyramid. They had the most sea horses I’ve ever seen in one place. Some were so tiny you had to really search the tank to find them. I’ve always thought sea horses were fascinating, so I really enjoyed their display. To the left is a picture I took of one of the fish tanks. I thought it was particularly cool, so I included it for you to see. The aquarium also had those walk through tunnels where the fish swim right over the top of you. We saw some pretty impressive sharks and other kinds of fish we only recognize from Finding Nemo. 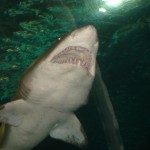 In one section there was a hands-on display. It had the usual starfish and lobster to be touched. But it also had an unusual starfish with very long legs. This one was very active. You normally never see a starfish move, but this kind get across the sand and away from you in a hurry. It was fascinating. We must have spent half an hour there playing with them. I took mostly video because they were so neat to watch.

After the aquarium, we had a wonderful dinner at one of our favorite restaurants – The Rainforest Cafe. You can see the girls sitting on the bench with Cha Cha, the Rainforest Cafe mascot, a red-eyed tree frog. 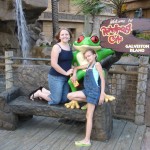 We had a wonderful dinner. Everyone was stuffed. The girls and I had been to the Rainforest Cafe before, but it was Aunt Dorothy’s first time. She really enjoyed it. And the food was delicious, as usual. We even splurged on dessert – the chocolate volcano. You only need one for a table of four. We didn’t even finish it. But, they are worth having. It’s a chocolate brownie volcano with chocolate syrup pouring forth from it’s summit. Surrounding the volcano is whipped topping and when it’s delivered to your table it has lit sparkles on top to give it the full Mt. Vesuvius effect. Yummy. 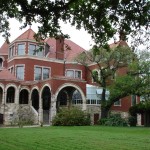 The following day we visited one of the historic mansions on the island, The Moody Mansion. You aren’t allowed to take video or photographs inside the home, but we took some nice shots on the grounds. This mansion was one of the few homes that withstood a major hurricane and therefore is one of the oldest homes on the island. The interior was stunning. The amount of woodwork that was displayed can’t even be described. If you’re ever in Galveston, it is a must-see.

That afternoon, we were back at Moody Gardens for a tour of another one of their pyramids – this one with a rain forest theme. We encountered a wide variety of birds and lizards, but the main attraction was the sloth. We spotted him up in the rafters moving ever so slowly among some branches. He was a three-toed sloth just like the one in Ice Age, the Disney movie. He had gray fur and was close enough that we could easily see his toes and sharp looking claws. 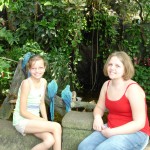 As Dorothy was walking down one area of the path, she spotted a type of gecko. He was really large and fascinating to watch. However, further up the path I spotted another kind of lizard and was on my way to take his portrait when Dorothy yelled at me. Her gecko was about to crawl up her leg. He had come out of the roped off area and was in the pedestrian path headed for her shoe. He was a funny thing. And big, too. He was twice as long as her foot. Once he realized he was attracting so much attention, he decided to head on up the path. We followed him until he disappeared into the stream that ran through the entire rainforest display.

There was an abundance of beautiful photo opportunities. Everywhere you looked was one breathtaking scene after another. I took some lovely pictures of the girls in various places. I’ve included one of them above with some of the beautiful Macaws we saw. 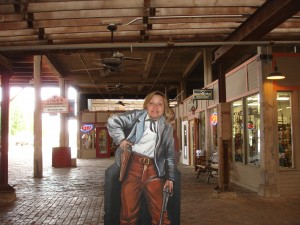 This was our last day in Galveston. We were heading up to see our former Children’s Pastor, Kenny, and his wife, Sara. They live in the Ft. Worth area near Dallas. As we left Galveston we used the ferry to cross Galveston Bay into Bolivar. We drove up the coast, stopping at Crystal Beach for more seagull feeding and shell gathering.

After meeting Dorothy’s friend to pick up the puppies, we headed north. Four hours later we reached Ft. Worth where we could wind down for a more relaxing visit with friends. While visiting we took in the sites of Texas with a stop at the cattle drive and “dressing up” as cowpokes. Yes, that’s me in official cowboy garb looking like I just found “a snake in my boots.” 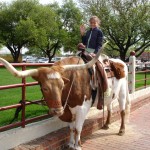 Allyson got the chance to herd cattle, but, being a city girl she seemed confused as to what was a cow and what was a horse. Kenny took the girls through this really cool maze. 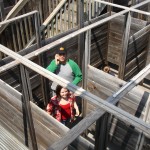 You can see in the picture where he is using satellite-positioning software on his phone to help them cheat. That’s why you can see all three of them in jail in the next photo. But, they did get through in record time! 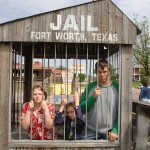 That’s what I get for trusting a Children’s Pastor with my kids. LOL 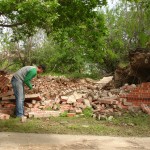 Since he already had a record, Kenny helped Dorothy and I get an authentic souvenir by stealing a brick from some piles where they are tearing down the original stockyards. In the last picture you can see our friends, Kenny and Sara, with my girls.

Hey Kenny and Sara – we miss you guys very much! 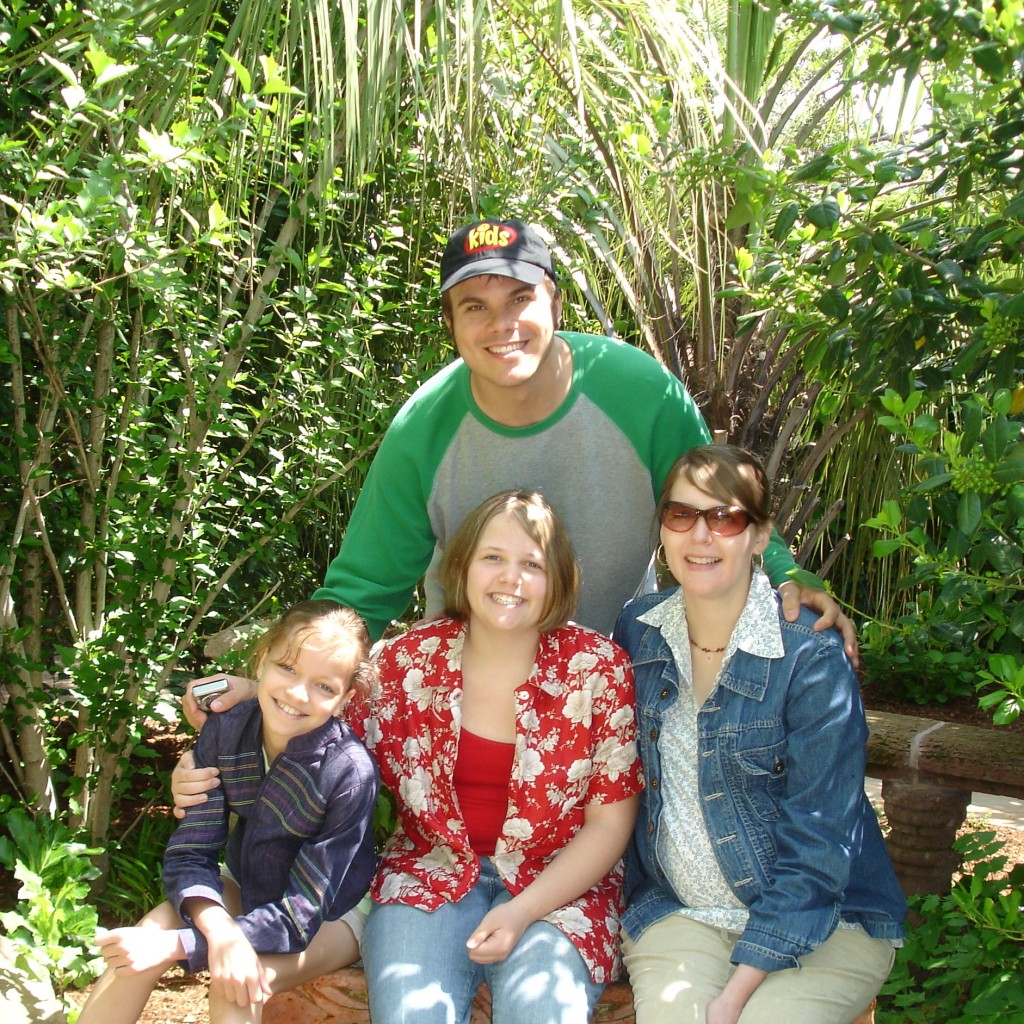