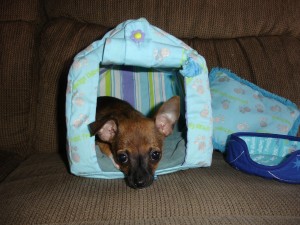 As you may have learned in “Two Puppies, a Pastor and Spring Break,” we have obtained a new puppy.

We’ve tried, or at least I have, to adopt a puppy before. First there was Bowler, a german shepherd approximately 6 months old and 60 pounds at the time I brought him home. Although he was beautiful, smart and loving, he had a difficult time adjusting to the change. He began to show aggression toward any and all strangers. Since we have kiddos at our house nearly every day I was afraid to continue to try. He made it nine days. My sister took him in. He’s still there and doing well. 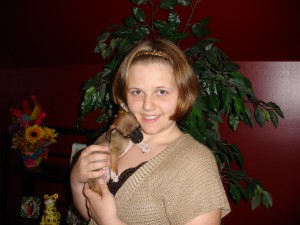 Another time I adopted a puppy from an animal shelter. He was really cute and much smaller than Bowler. We named him Dollar like the dog from Richie Rich comics. Although he too was adorable, I continued to read about his breed, Bassett, and discovered he was going to be a larger dog as well. I decided he wasn’t exactly what I had wanted and placed him with a nice family with three children. He made it seven days.

By now I’m quite discouraged. On top of the attempts and disappointments, my husband has never been committed to having a dog. He has been against it and only willing to allow it to appease me. He told me to quit trying and I agreed to try to let it go. 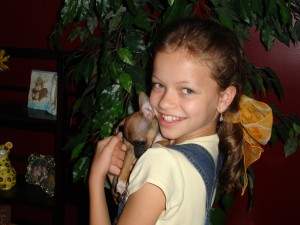 For Christmas this past year my husband gave me the set of Legally Blond and Legally Blond 2. I loved those movies when I first saw them and enjoyed being the proud owner of them. The main character, Elle Woods, has a dog. His name is Bruiser and he’s a Chihuahua. After receiving and viewing the movies again, I mentioned to my sister that if I ever tried again to adopt a dog, I would choose a Chihuahua. It would suit my lifestyle more and they are generally smart, loyal and easily cared for.

I didn’t give it another thought, but the idea apparently stuck with my sister. She had a girlfriend who owned a pretty little female Chihuahua and an acquaintance who owned a cute little male. She arranged their discreet union and by my birthday I had pictures in my inbox. 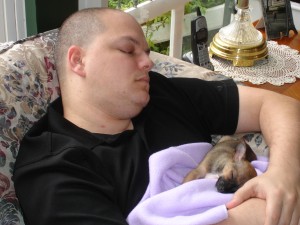 In the meantime her girlfriend had moved to Louisiana, thus resulting in our Spring Break trip. Now, this whole time I have not shared the news with my husband. I figured why discuss and discuss when I could just take the initiative and bring her home. If he didn’t like her, I’d find her a nice home. If he did like her, well then, we’d have saved ourselves weeks of discussing it.

We got home from our vacation on a Friday about 2:00 am. Upon arriving home with my new little girl, Dixie, I placed her in my husband’s arms and said, “Here, hold this.” I was nervous over his reaction, but he took to her almost immediately. He thought she was cute and since she was so little (and always would be) it relieved some of his previous fears (like carpet-digging or door-scratching) about having a dog.

That’s been seven weeks ago. So Dixie has already been with us approximately six times longer than previous attempts. She’s doing well and is loved by all. Even my husband, as you can see by the picture of him napping with her in his arms.

← Two Puppies, A Pastor and Spring Break
Sierra Goes to Work with a Vet →