When I first starting writing Camel Lot: A Misplaced Adventure, I had no idea what I was setting in motion. Writing, yes, I can handle that. Artwork, sure, I’ve done that before. Publishing a book – yikes! Even ebook format had my head spinning. What is ebook exactly and why is it different depending on what you read it on? How do I even know if I’ve sold anything if it’s all electronic? I have no idea what I’m doing. But, my book managed to arrive at Amazon, then the iBookstore, then Barnes & Noble. As if by magic, my children’s book appeared in online retailers around the virtual globe. I could search for my book and voila, there it would be. 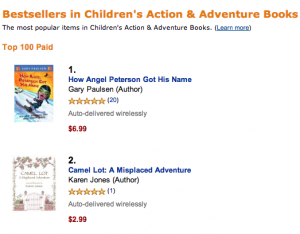 Rob first pointed out the ratings about a week after Camel Lot became available on Amazon. It was ranked #9 in the Children’s Action & Adventure ebook category. I was thrilled. How cool is that? What does that mean? I still have no idea. Apparently ratings on Amazon is calculated using a very complex algorithm based on book sales, book reviews, blood type and pancake ingredients. So it really doesn’t tell us anything.

Over the next few weeks, the rating declined until it was no longer in the top 100. No big deal. I’m still not sure I have any idea what the ratings mean.

← Meeting the Dreadline… I mean, Deadline
Review: The Secret History of the Pink Carnation →