We took a vacation to Los Angeles, California in July 2011. We each had several items on our list of things to do. Some things were new and some we’ve done before but they definitely deserved repeating.

Allyson wanted to ride bikes on the Strand with her friend. We didn’t get the chance to do that last year. This time we made it top priority. It was loads of fun for the girls. Okay, for us too. Rob and I walked the Strand taking pics of the ocean while the girls peddled their hearts out.

I wanted to indulge in those amazing sweet potato fries at The Veggie Grill. I’ve really missed those fries. I don’t know how they make their sweet potato fries so much better than everyone else’s, but they truly are. Maybe their seasoned with Heaven Salt.

We all couldn’t wait to play in the Pacific Ocean. Last year we had Dixie much of the time and couldn’t take her on the beach. This year, we all walked in the water. FYI – Occasionally one wave will be larger than the others. Be prepared for thigh-deep water. Choose shorts over capris when beach/wave walking.

One thing we wanted to do during our time in LA last year was attend a movie at Grauman’s Chinese Theater. We never did because the films they were showing at the time weren’t what we call “full price” events. They were only “rental” worthy (think $1 Redbox or Netflix) to us and we didn’t want to waste money or our first visit to the famous theater on less than a spectacular movie.

Grauman’s Chinese Theater is located on Hollywood Blvd. It’s just down the street from the equally famous Kodak Theater where they film American Idol and do the Oscars. But Grauman’s is where they immortalize the rich and famous by suggesting they step into concrete. And you thought only the Mob could do that.

So, what spectacular “full price” amazing movie did we choose to see on our first outing to Grauman’s Chinese Theater? Harry Potter, of course. We got tickets to see the long-awaited, highly-anticipated Harry Potter and the Deathly Hallows Part 2. In 3-D. With free popcorn. 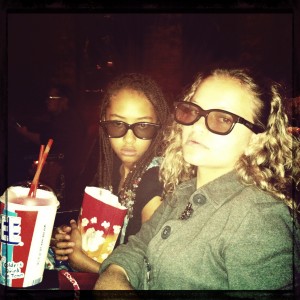 Hollywood Blvd. is also home to the Walk of Fame. Countless stars are immortalized on the sidewalk with their names etched in gold on black stars. This draws quite a crowd regardless of time of day, day of the week, or week of the year. This place is always packed. If you come, the street performers run the gambit of ridiculous and rude to fabulous and friendly. FYI – they are working for tips to support themselves, so if you want a picture with one of them, be polite and be prepared to tip. Performing here might well be the only job they have.

Once inside the theater, we find seats and send Rob for snacks. The place is decorated beyond imagination. I’ve never seen such a beautiful theater. The seats are plush and there are thick, red velvet curtains (which they use) hanging in front the screen. The balconies are ornate and everywhere you look the scrollwork is beautiful.

The movie is in 3D, so we all get those adorably flattering and highly-sought-after viewing specs. Jealous? Settled into our amazing seats, free popcorn in hand, the show starts.

Don’t worry, no spoilers here. Like there’s still someone who hasn’t seen the last installment of Harry Potter. Yeah, right.

Our impression of the movie was: Wow! Phenomenal! Stupendous! Seriously, I think it was one of the best in the series and an excellent way to wrap things up. What about the 3D? I know 3D takes a lot of grief for not being particularly good, which in many cases, it deserves. But in Harry Potter, it was spot on. The beginning title shots were far more 3D-ish than the rest of the film. But, the rest of the film gives you an overall sense of depth without any of the corny vampire fish leaping out of the screen effects meant just to cause you to jump.

After the movie, you can’t just file back out into the warm, California sunshine. No. You have to visit the displays set up around the lobby. In large plexiglass cases are costumes worn by the cast. Pictures are allowed and even encouraged, but don’t take too long. They only have one screen at Grauman’s and another showing of Harry Potter will be coming up soon.

To sum it all up: Excellent movie, free popcorn, beautiful theater = one fantastic event.