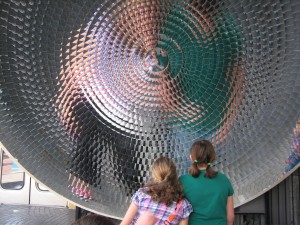 You have to make your trips few and far between to really enjoy going to the Louisville Science Center in Louisville, KY. Luckily it had been ages since Allyson and I had been. We also took friends with us which always adds to the enjoyment of any outing. Okay. Maybe not always, but definitely this time.

The front entrance still has the huge mirrored bowl-like sculpture that entertains by creating colorful mosaics from everyone’s faces. Look closely in the center and you can actually see Allyson with her friend, Allison. I know it’s confusing. Aren’t we lucky they aren’t spelled the same too? 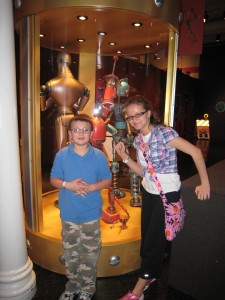 The main area has an ever changing exhibit pertaining to one area of scientific study or another. During our visit, The Robots Interactive Exhibit was on display with several fun and interactive games and activities. You can visit this special exhibit now through June 16th, 2010. More information and great teacher downloads can be found at Robots Tour.

There’s plenty to do with robots of all kinds in this exhibit. You can pose as a robot, browse the collection of drawings displayed in flat file draws at an artist’s table, build your own little robots that whirl and spin, or set up dominoes in various patterns. With parental help, the robot building can be fun for younger ones. Allyson enjoyed trying it but everything was very simplistic and didn’t hold her interest for long. She spent far more time building a domino trail which fell in under 30 seconds at the slightest nudge of her finger.

There’s a fun display of famous robots from the media. We found C3PO, Gort from The Day The Earth Stood Still, and the nameless robot from Lost in Space (the original). Speaking of that robot, did you know the famous phrase, “Danger, Will Robinson!” was only used once on the show? Funny how a little thing like that can become such a part of pop culture. 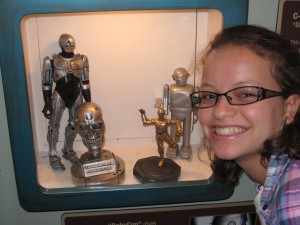 Allyson really enjoyed getting her picture taken with the Governor of California, I mean the Terminator (not artificial life-size). This particular terminator was from Terminator 2. RoboCop was there too, but he’s not nearly as cool. **I took a few minutes here to find a memorable quote from RoboCop to soften the earlier statement that he wasn’t as cool as the Terminator. However, I barely found any quotes that made sense, much less were memorable. Sorry if you’re a fan.**

After the Robot exhibit, we toured the other areas. At The World Within Us exhibit, you can “drive” an orange VW bug, experiencing the sensation of driving under the influence. I don’t see how that’s science. Seems more like a preachable moment than a teachable one. The Time Machine is always a big hit, but the wait is terrible. Also, if you don’t hold super-super still, the images don’t turn out that great. There’s a really cool Amazing Beginnings exhibit that I hadn’t seen before. Eight embryos and fetuses show the progression of cells to baby. However, without interaction it was dull for kids. Maybe more will be added to it. 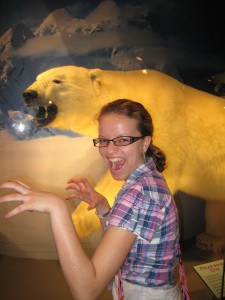 The World Around Us exhibit is always fun, especially if you love animals. This is a regular exhibit at the center, but it’s fun and interesting. There are lots of animals to read about and some interactive areas that encourage the little ones.

The World We Create exhibit is probably my least favorite. It has plenty of interactive exhibits, but it pertains too much to engineering and building and the like. We didn’t stay long.

The KidZone is technically for those kiddos 7 and under, but we all went in anyway. We were told we could – so get that look off your face. This has to be one of the best areas of the Louisville Science Center. It’s not particularly science-y, but it’s hugely interactive and extremely entertaining as well. You can fly a plane, drive a bus, make the dinner, visit the hospital, build something at the construction zone and run the plumbing. There’s even a zone for really little ones that aren’t walking yet that looks like the surface of the moon – all cheesy, soft and full of holes. You get to it through the space shuttle. I chased Allyson and the others around through the (not adult-sized) airplane trying to take pictures of them. I majorly hit my head really hard on a low clearance once. Epic fail.

← A Thanksgiving Poem
Buy Me a “Writer” Kevlar Vest →