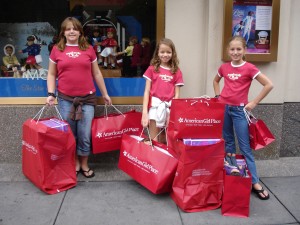 It was a whirlwind trip to the windy city. It has become a yearly tradition to travel toChicago with friends, Val & Kim, and visit the American Girl Place. This year, we also had the added pleasure of visiting the Field Museum and seeing the King Tut exhibit.

are approximately 6 Starbucks between us and Chicago and my lifetime membership requires me to stop at all of them.

When we arrived at our hotel (the Wyndham), we got settled in and took a dip in the pool. Whirlpool for us grown-up girls. After swimming, we all had dinner in the hotel restaurant, Caliterra. It is an Italian-inspired upscale bistro with darkened windows and candlelight. Very pretty. Each of us had a pasta dinner of varying kinds. They brought assorted breads to the table in a silver, linen-lined basket. Ice cream for dessert for the girls and the best cheesecake on earth for myself. Val and Kim had something too, but after one bite of the cheesecake… I forgot what they had. 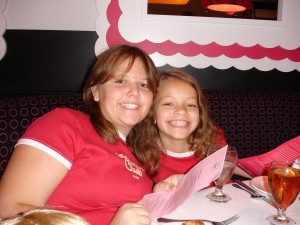 We all slept pretty well that night and got up eager to get over to American Girl Place. We were having brunch in their cafe, so Val took off a few minutes before the rest of us to put in reservations. The girls and I stopped by the concierge to ask directions so I could get lost that much faster. Thank goodness for cell phones. Of course, when we didn’t arrive as expected, Val had to call me. What I mean to say is, she had to call Rob at home in Indiana to get my cell phone number, then call me on her daughter’s cell phone. She got me headed in the right direction, but I still had to get assistance from a homeless guy. He was great. Non of that “Take Ontario 3 blocks” garbage. He gave “chick” directions. He said, “Go straight until you get

to Marshall’s, then turn left past Guess?. Go straight past Ralph Lauren until you reach…” 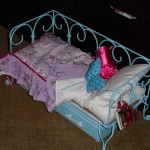 Val was already seated when we got there, but they hadn’t begun serving. The girls and I got settled in and we all placed our orders. Brunch was delicious, but it always is. After eating, we took the girls shopping. Sierra had never been to American Girl, but she had her prepared list and was done in under 15 minutes. Allyson took a little longer. They made their selections and then I surprised them

with doll beds. The shopping is fun and American Girl Place is just cool to be in. But, carrying the purchases back to the hotel is a back-breaker. My arms were sore too.

We decided to walk around the shopping district until time for dinner. We went to the largest Pottery Barn I’ve ever seen. We visited the Hershey Factory. The smell of chocolate will almost knock you off your feet. We planned to take another carriage ride like last year. 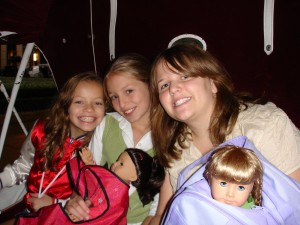 Allyson enlisted Sierra’s help in finding the same horse and carriage, but he wasn’t to be found. We settled for a lovely black horse. The top was up this time for fear of rain. And rain it did! Val was being hit by so much I opened my umbrella in the carriage to shield her from what was blowing in on her side. She was still soaked. It had started raining right after we boarded the carriage… and stopped just as we returned. It did give us the chance to get photos with our horse of choice. It would have been disappointing had it not been so comical.

That night we ate at Rainforest Cafe. Sierra had never been there either. She was so excited. We’ve been several times with Allyson, and she always loves it. We told the host that it was Sierra’s first time, so he was sure to sit us next to the largest animatronic elephant. We weren’t at our table 2 minutes before it went off, roaring and stomping it’s foot. It really startled Sierra. We got to meet Cha Cha the frog and the girls tried fried calamari. After dinner, we picked up a couple of souvenirs in the gift shop. A stuffed elephant for Sierra and an umbrella Cha Cha for Allyson. Now she couldn’t wait for it to rain!

The next day was King Tut day! Val and Kim have been to the Field Museum before, but it was a first for the rest of us. You couldn’t take pictures inside the actual Tut exhibit, but pictures wouldn’t have done the artifacts justice anyway. It would be like trying to photograph the depth of the Grand Canyon or the beauty of clouds. We had the audio tour. You receive a headset and numbered device. As you view certain artifacts, there is a number in the upper right-hand corner of the containment box.

You put that number in and get more information about the piece. It gives you a much better tour than just walking through and reading the text on each artifact. I highly recommend it.

We visited the gift shop and Allyson and Sierra picked out an Egyptian-inspired necklace as a souvenir. We took pictures in front of Sue (the largest and most compete T-Rex), 2 preserved elephants and some totems that were in the main lobby. We walked through a pyramid set up with other Egyptian artifacts and mummies. You could take pictures in this area, so we did. It’s not a real vacation unless you get your picture taken with a mummy.

Ahhhh, I can’t wait for next year.

← Who Are These People?
I Took Sierra to the Pound →